Last month saw our 7th Stand Up night go off without a hitch at The Rugby Club in Kilmarnock, and we handed over the cheque to the Laurie and Ellie fund. But more on that later.

A full house enjoyed some great acts off the Scottish comedy scene. Compere Graham Mackie kept things going all night and enriched everyones lives with his first encounter with an exfoliating glove. John Gavin set us off with a great set including his hatred of foxes, lucky for him it wasn’t squirrels. John Speirs then enlightened the crowd with his story about the time he never met Hollywood actor Vince Vaughn before Jojo Sutherland closed the second section with tales from her life on the east coast. Des Clarke then took the roof off Bellsdale with a brilliant headline set where he talked about absolutely everything, including the time he actually met Hollywood actor James MacAvoy. 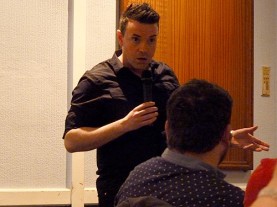 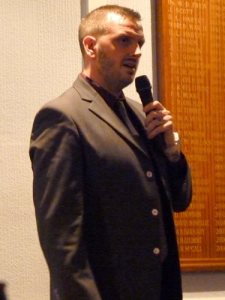 A brilliant night which actually started on a high when Ellie, Laurie and their mum visited to pick up the cheque for £1412 from The Killie Trust. The evening in the Kilmarnocks Rugby Club raised £1000 for the appeal. The further £412 was raised at Rugby Park, when before the match versus Hearts members of the Trust board were out rattling buckets and got a great response from the fans in attendance. A huge thanks from the Trust to all those in attendance on the night as well as those who did their bit at the Hearts game. Also a huge thanks again to John Gall at Brownings for the half time fayre. 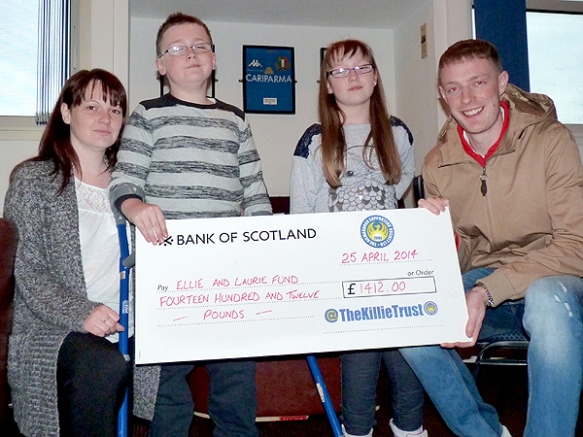 Hope to see you all at the next one.

We are back! 25th April is the date for your diaries and we are in a new venue for this one, The Kilmarnock Rugby Club out on the Queens Drive. So its new surroundings but no change for the rest, the price remains the same and the standard too as we are bringing more top drawer comedy to Killie town.

For this one we have the brilliant Des Clarke (@des_clarke), who as well as being one of Scotlands top comics is also the host of Capital FM’s breakfast show, the supremely talented Jojo Sutherland ( @jojosutherland) who has pretty much played every British comedy club you could care to mention plus ones abroad too. Also we have 2009s Scottish Comedian of the Year, the awesome John Gavin (@johngavincomedy) and Graham Mackie ( @graham19590) who not only will be the funniest guy you have ever seen that looks like Santa but will inexplicably be able to name one of your old teachers from the school. Completing the line up and back to complete a hat trick of outings at our comedy nights is local act John Speirs ( @johnspeirsii), all in all a terrific evenings worth of entertainment in store.

As already mentioned, ticket price remains £15 for all those top acts and can be purchased by calling 07429615232 or by following links on our website, blog, facebook, twitter etc to our eventbrite site for the event. The night is in conjuction with the Rugby Club to help raise some funds for them and the Killie Trust will be donating our funds raised to the Laurie Finlayson Appeal, more details of which can be found here: http://www.justgiving.com/Ellie-Laurie?utm_source=Twitter&utm_medium=fundraisingpage&utm_content=Ellie-Laurie&utm_campaign=pfp-tweet-mobile.

So there it is, avoid the scrum and get your tickets quick, with such a great line up these nights sell out fast! See you all there, April 25th.