The Killie Trust this season swelled the ranks of its sponsorship stable with the front of Burnpark Boys Club jerseys this season being emblazoned with our @thekillietrust twitter handle logo.

On Saturday 17th September Trust board members David Davison, Sandy Armour as well as chairman Barry Richmond were on hand to get a snap with the team and see the boys in their new threads. The photo featured in The Kilmarnock Standard the next week, though sadly our copy of the picture got lost due to a technology malfunction of some description. So, on a freezing cold Saturday morning in January, Saturday 19th of January to be exact, John Speirs went out to get a few pics and see how the boys were getting on. Squaring up against Balmoral Thistle the lads warmed up in jumpers and jackets before lining up between the sticks for pregame photo. 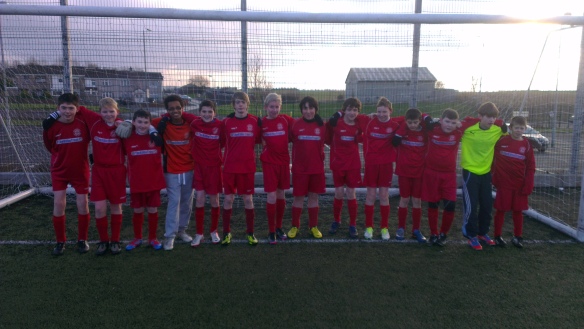 Brian Mitchell and fellow Burnpark coaches Martin Baxter, Sean Munro, Kevin Mcmurtrie and Ross Hume have their boys training twice a week on Tuesdays and Thursdays at the Grange Academy in Kilmarnock. They are an under 14s team competing in their second season (the club is also two years old) in the CAYFA (Central Ayrshire Youth FA). The boys can also count London based but Kilmarnock born stand up comedian Del Strain amongst their fans! If you are looking for any further information they have a twitter account @burnparkBC and also a facebook page. So get following and liking.

To top it all off, printing of the kits was done at Rainbow Ink, one of the Killie Trusts community partners.

Best of luck with the rest of the season guys.